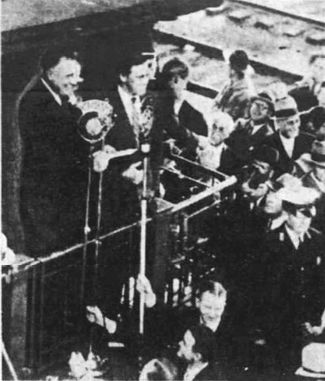 President Franklin Roosevelt speaking from his train at Birmingham Terminal Station on November 18, 1934

The 1934 Presidential visit consisted of brief remarks given by President Franklin D. Roosevelt on Sunday November 18, 1934 at Woodrow Wilson Park.

The president had given a longer speech that morning in Tupelo, Mississippi, and was en route to his retreat in Warm Springs, Georgia when he stopped in Birmingham. He greeted a crowd that gathered at Birmingham Terminal Station, where he was given a flower for his lapel by Willie Sanders of Albertville and promised that 2-year-old Patricia Hall of West End would be treated for "infantile paralysis" at his Warm Springs Institute.

President Roosevelt then delivered brief extemporaneous remarks to a larger crowd at the park at 2:00 PM. He referred to a special economic and social connection between the city of Birmingham and the "great territory" of the Tennessee Valley to the north. He expressed his understanding of the economic difficulties of the Great Depression, especially in the heavy industries so important to the Birmingham District. He referred to the increasing demand for iron and steel due to the expansion of public works projects, as well as the successful rationalization of coal mining under the National Recovery Act's "Coal Code" (which was later ruled unconstitutional).

He went on to call for local support for the Tennessee Valley Authority, including its regional planning and economic development projects. He acknowledged that "a few, just a few, of your citizenry are leaving no stone unturned to block, to harass and to delay this great national program," but insisted that, "the overwhelming majority of your business men, big and little, are in hearty accord with the great undertaking, [and] eager to carry forward the development of this region in which Birmingham plays so important a part."