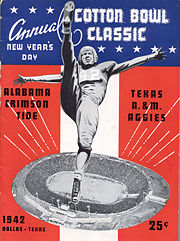 The 1941 Alabama Crimson Tide football team finished the season with a 9-2 mark, a 3rd-place finish in the Southeastern Conference title race, and a #20 ranking in the Associated Press poll.

The club was credited with a National Championship by the "Houlgate System", a mathematical ranking system devised by Carroll "Deke" Houlgate of Los Angeles, California and syndicated to newspapers between 1927 and 1958. That title is one of the twelve championships claimed by the school's sport's information office, and is by far the most controversial of the school's championship claims. It has been justified because the Houlgate System was the more established and respected selector at the time (as recognized by NCAA historians) and because Alabama played a longer season and more respectable opponents than other teams with claims.