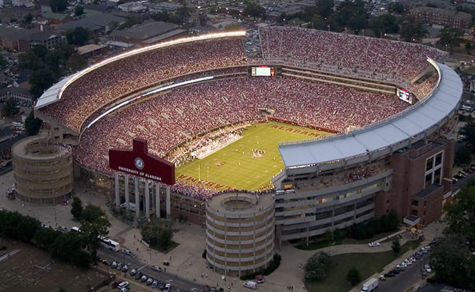 Bryant-Denny Stadium (formerly George Hutchenson Denny Stadium, Building #7046) is the home stadium for the University of Alabama football team, located on campus in Tuscaloosa at 100 Bryant Drive. The stadium, which opened in 1929, has a current seating capacity of 92,138.

It is named after Bear Bryant and former UA President George H. Denny. The stadium is the fourth-largest stadium among schools in the 14-member Southeastern Conference, and seventh-largest on-campus stadium nationwide.

George Hutchenson Denny Stadium opened on September 28, 1929 with a 55-0 victory over Mississippi College. It has undergone six expansions since then. The first came in 1937 when 6,000 seats were added on the east side and brought capacity to 18,000. After two more expansions in 1950 and 1961, the grandstands reached a total of 61 rows and the capacity was 43,000. In 1966, the grandstands were extended into the end zones, and the capacity grew to 60,000. The west upper deck and press box added 10,000 more seats in 1988. The east upper deck was added for the 1998 season, providing 10,000 additional bleacher seats and 81 skyboxes on two levels and raising the total capacity to 83,818. Also added during this expansion were a scoreboard with video display capabilities in the south endzone as well as a new east side entrance tower, a brick facade, and reception areas for the Scholarship and A-Club level patrons.

The most recent expanison was completed in fall of 2006. This brought seating capacity to 92,138, making Bryant-Denny Stadium the seventh largest on-campus facility in the nation, the largest stadium in the state of Alabama, and the fourth largest in the Southeastern Conference.

With the addition of two new Jumbotrons, one placed in each corner of the north endzone, Bryant-Denny Stadium is the only college stadium in the country with three jumbotrons. Four-feet high and 450 feet long LCD ribbon screens have been placed along the East and West upper deck facades making it the largest of its kind in NCAA football and rivaling most professional stadiums.

Prior to Denny Stadium being built, the Tide played on the Quad (1893-1914) and Denny Field (1915-1917 and 1919-1928). Those years represent a total of 53 games for which Bama posted a 44-9 record. There were two different sites used on the Quad, the first located on the southeast corner, with the field running parallel to 6th Avenue. Around the turn of the century, the field was moved 90-degrees to the west to run parallel to University Boulevard.

In 1915, games were played on University Field, renamed Denny Field in 1920, where the Tide played for the next 14 years. Alabama posted a 43-2 record on that field and held opponents scoreless in 35 of those games. Denny Field was two blocks east of the current stadium, behind Little Hall. Mallet Hall and Parker-Adams Hall now stand on the north endzone of Denny Field. A parking lot covers the rest of what remains of Denny Field.

The Crimson Tide owns an impressive 187-32-3 all-time record at the stadium, although this record is misleading, because prior to the construction of the east upper deck in 1998, the Crimson Tide's major home games were played at Legion Field in Birmingham. Bryant-Denny has boasted sellouts at 56 consecutive Tuscaloosa games since 1988. Bryant-Denny is the fourth-largest stadium in the Southeastern Conference after Neyland Stadium at the University of Tennessee, Sanford Stadium at the University of Georgia, and Tiger Stadium at LSU.