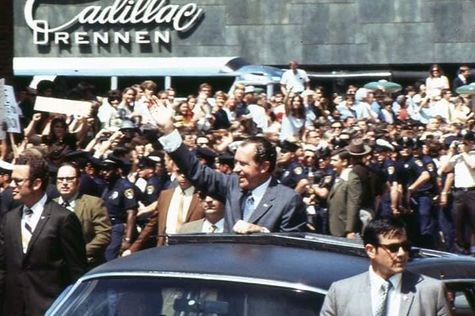 President Nixon during his 1971 visit to Birmingham. Photograph by David Smith.

The 1971 Presidential visit consisted of a briefing on domestic policy by President RIchard M. Nixon on May 25, 1971. The president arrived in Birmingham after a speech in Mobile. His motorcade conveyed him to the Parliament House hotel. Nixon emerged from the sunroof of the presidential limousine to wave at cheering crowds. The "Alley Cats" band from Workshops Inc. performed for the president.

The president explained his policies in the context of America's position in an emerging global community, including the role of the United States in the Vietnam War. He foresaw a near future in which that war would be successfully concluded and asked "once you have peace, what do you do with it? How do you maintain it? How do you keep it?" He described the challenge of maintaining a growing economy without wartime production and maintained that "while the economy is not at full capacity, the Federal Government has a responsibility to spend more than it takes in in order to take up that capacity," limiting itself to the boundaries of an economic landscape of full employment lest it trigger inflation. In discussing the dangers of wage-price spirals, Nixon outlined the performance of the American steel industry, which had declined relative to Japan in global market share. He went on to discuss efforts to make government more effective and to hand over more power to state and local governments.

After discussing government policy, Nixon described to the assembled press representatives a spirit of unity which he believed needed to be reforged from a splintered populace. Divisions of all kinds: between regions, between ideologies, between races, and between classes, serve only to weaken the position of the United States. One means of inspiring unity would be national engagement in a common and progressive enterprise; whether it be ensuring the place of democracy in the world, exploring the universe, or tackling domestic problems.

Prior to the event, the Federal Bureau of Investigation had received tips that the Alabama Christian Movement for Human Rights and Southern Christian Leadership Conference planned to demonstrate peacefully at the Birmingham Municipal Airport and outside the Parliament House. A second "well-placed" source reported that members of the Alabama Black Liberation Front were planning to assemble outside the Parliament House at 1:30 PM to "scream at the president."