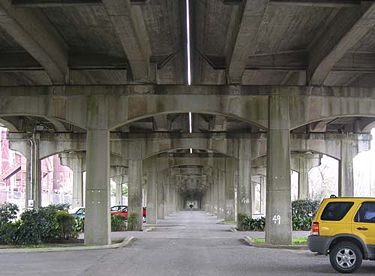 Beneath the viaduct at the Sloss Furnaces entrance.

The 1st Avenue North Viaduct is a steel-span viaduct carrying 1st Avenue North from Carraway Boulevard (formerly 26th Street) to 34th Street, adjacent to Sloss Furnaces just to the east of downtown Birmingham. The bridge was designed and built by W. C. Howton Contracting, and completed in the Autumn of 1950. The 1st Avenue Viaduct currently carries four lanes of traffic.

The first "permanent" viaduct on 1st Avenue (replacing earlier wooden structures) was the 2,632-foot long by 60-foot wide Weatherly Viaduct, completed in 1915 due to the efforts of Birmingham City Commissioner James Weatherly. That span bridged the active railroad tracks near Sloss Furnaces and the Birmingham Terminal Station. Construction began on July 1, 1914. 13,550 cubic yards of concrete were used to construct the 31.5-foot-tall structure which carried two streetcar tracks on its 40-foot roadway and was flanked by two 10-foot-wide sidewalks. Though budgeted at $280,000, the actual cost for construction was $200,000, which was split among the Louisville & Nashville Railroad, the Southern Railway, the Alabama Great Southern Railroad, the Sloss-Sheffield Company, Birmingham Railway, Light & Power, and the City of Birmingham (which footed 1/4th of the bill).

At the time the structure was rebuilt, the Birmingham Electric Company was carrying 26,000 passenger over it each day. The detour during construction added about 10 minutes to the trip.