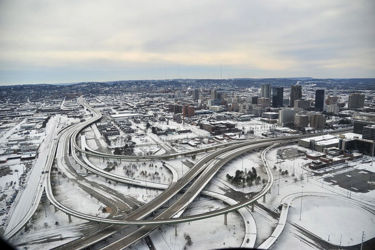 The 2014 winter storm was an unpredicted sudden snowfall on Tuesday January 28, 2014 which formed ice on roads and streets just as schools and businesses shut down, stranding tens of thousands of people in stopped traffic, at schools, and at workplaces across the entire Birmingham area. Cold air temperatures prevented the ice from melting for two days, forcing the region into a virtual standstill until emergency workers and thawing conditions cleared major roadways on Thursday, January 30.

For the days leading up to the storm, local and national forecasters were warning of the likelihood of winter weather problems in Southern Alabama. Even up to 10:00 AM on Tuesday morning, forecast models were still indicating that the Birmingham area would only receive a "dusting" of snow. Schools and businesses that would normally have shut down in advance when icy conditions are imminent opened as usual Tuesday morning.

Only around 10:15 or 10:30 AM, after it was apparent that the snowfall was heavier than expected and was sticking to cold streets, did schools begin to announce closings and offices begin to send workers home. By the time most people got out on the roads, a layer of ice had formed over most paved areas and expressway on-ramps were already jammed. Unprepared drivers began contemplating the likelihood of being trapped in standstill traffic indefinitely versus the risk of braving the elements on foot while having to worry about family members and friends stranded all over the area. Strained cell phone networks dropped calls, adding to the widespread panic.

Road clearing equipment and utility vehicles, anticipating bigger problems to the south, had already been sent to Montgomery and beyond and had to be recalled the following morning.

Alabama State Troopers reported nine fatalities statewide from vehicular accidents caused by ice and snow. None of those were in Jefferson County.