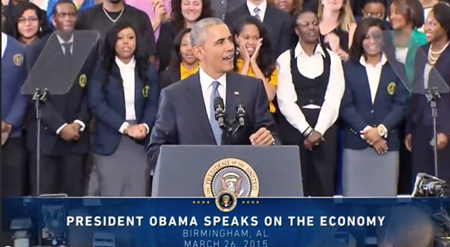 The 2015 presidential visit to Birmingham was a brief stop made on March 26, 2015 by President Barack Obama. He spoke at the Arthur Shores Fine Arts Building at Lawson State Community College, in front of an audience made up primarily of students. His remarks addressed economic issues faced by Americans in urban areas, including barriers to higher education and predatory lending businesses.

Birmingham was selected for the remarks because of Alabama's preponderance of payday lenders, and because of Birmingham's moratorium on approving new licenses. Lawson State was selected in part because of its success in training graduates for the workforce.

President Obama was scheduled to arrive at Birmingham-Shuttlesworth International Airport on Air Force One at 1:50 PM. He hosted a brief round table on economic issues at Lawson State beginning at 2:35 and began his public remarks, before a crowd of 1,800, at 3:10 PM. He left the city from the airport at 4:50 PM.

Before his remarks, President Obama recognized Rep. Terri Sewell and Mayor William Bell in the audience. He congratulated the UAB Blazers for "busting" his NCAA bracket and praised Lawson State's students for investing in themselves.

In his remarks, the President voiced support for a proposal by the Consumer Financial Protection Bureau to more closely regulate payday loan businesses, an industry formerly subject mainly to state regulation. In a larger sense, he also pledged to veto any legislation brought to him that eroded Wall Street reforms implemented in the wake of the 2008 financial crisis, and generally criticized draft budgets circulated by Republican leaders in Congress. He told the audience that, "I don't think our top economic priority should be helping a tiny number of Americans who are already doing extraordinarily well, and asking everybody else to foot the bill."

During his speech, President Obama recognized Reverend Shannon Webster of 1st Presbyterian Church for his efforts to publicize the harmful effects of payday lending and to lead the way for the development of better, community-based alternatives.