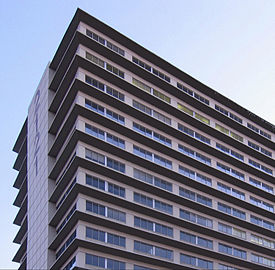 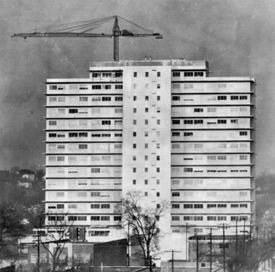 The 2121 Building under construction in January 1963

The 2121 Building is a 17-story, 276-foot-tall high rise office building located at 2121 8th Avenue North in Downtown Birmingham. It was developed, in 1962–63 by Cobbs, Allen & Hall for the Bloomefield-Sender Enterprise of Memphis, Tennessee. The development was leased primarily for federal offices. Original tenants included the Internal Revenue Service's Alabama district office.

The 227,447 square-foot concrete-framed building was designed by John H. Summer and Associates of Atlanta, Georgia and cost $2.5 million to construct. It occupies a 200-foot x 190-foot L-shaped tract on the south side of 8th Avenue between Richard Arrington, Jr Blvd North and 22nd Street North.

WAQY-AM operated a penthouse studio from the 2121 Building beginning in the late 1960s.

In 2006 the building's interior underwent significant renovations. Alagasco designed and installed a 3-unit hybrid boiler system to replace the building's original boiler. Because the multi-jurisdictional Personnel Board of Jefferson County is the primary tenant, the various municipalities who participate in the employment system were asked to contribute to the cost of renovations.

In 2021 the building's exterior was repainted and exterior signage updated with illuminated signs.