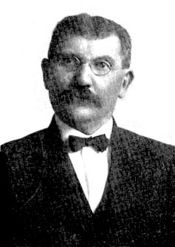 Adolf (or Adolph) Bernard Loveman (born May 23, 1844 in Györke, Hungary; died July 4, 1916 in Birmingham) was the founder of Loveman's department store.

Loveman was the son of Bernard and Esther Wirkman Loveman ("Liebman" in earlier generations) in the town of Györke in the Kingdom of Hungary (now Ďurkov in modern Slovakia). He emigrated to the United States in about 1865 and, after a stop in Tennessee, opened a dry-goods store in Greensboro (Hale County).

Loveman relocated to Birmingham in 1887 and opened the A. B. Loveman's Dry-Goods Emporium at 1915 2nd Avenue North. The following Spring he took on a partner, Moses Joseph of Selma and expanded into the adjoining building. Emil Loeb joined in 1889 and the three constructed the enormous Loveman, Joseph and Loeb building on 19th Street North in 1890. The store was expanded in 1916 and became the largest department store in the city. Loveman died the same year.

Loveman and his wife, Minnie adopted her nephew, Joseph Loveman. He took over the company after Moses Joseph's death in 1925. They also had three of their own children, Esther, Bernard, and Leona. The Loveman's employed the mother of A. G. Gaston as a maid at their home on Rhodes Circle.