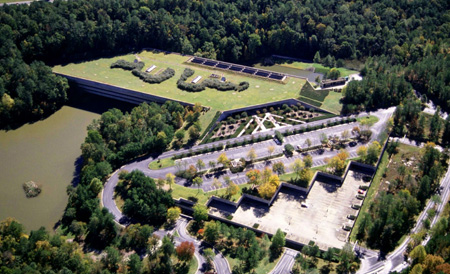 The AT&T Alabama Operations Center (AOC, originally the South Central Bell Alabama Operations Center) is a 3-story, 450,000-sqaure-foot office building for AT&T located at the intersection of U. S. Highway 280 and I-459. The $42 million building, designed by Giattina & Partners and completed in 1982, is a notable early example of an energy-conscious large-scale office development.

In 1978 South Central Bell commissioned the center in order to consolidate departments working in numerous leased spaces around Birmingham and to further its company-wide interest in reducing energy consumption. Six Alabama architecture firms were invited to submit entries in a design competition judged by independent experts. Their unanimous choice was the Giattina & Partners scheme which called for a low-slung building spanning an artificial lake and topped with a green roof.

The lake was created by damming a small stream on the 50-acre site, with a channel running between the foundations of the building. It is stocked with catfish and bass, but no fishing is allowed. The water is used in the center's cooling system, while solar collectors on the roof's edge produce hot water for the heating system, keeping offices at a constant 78° temperature with low humidity. The roof is covered with a 2-foot layer of sand and sawdust with sod growing on top. Originally the company piped in "ocean-like" sounds to foster a calm environment.

The project won an Honor award from the American Institute of Architects Gulf States Region and was featured in a Progressive Architecture issue on energy-conscious design.

The preservation and enhancement of natural amenities on the center's site attracted wildlife. Ducks and geese were brought by an employee and happily took up residence on the artificial lake. One of a family of bobcats that took up residence during the building's first year attacked Patricia Powell, a security guard who was working at night. She suffered minor injuries and the animals were trapped by Jefferson County animal cruelty officials.

AT&T moved most of its workforce from the operations center to other locations in the 2010s. It made plans to vacate the building in 2016 by moving remaining staff to the AT&T Data Center at 1876 Data Drive in Hoover. The 125-acre site was sold to Bayer Properties, developer of the nearby Summit shopping center, in 2016.