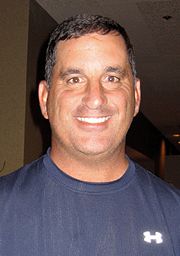 Del Greco was raised in Miami, Florida where he played different sports throughout the year. While attending a Catholic grade school, at the age of 14, his soccer team won a state title. While at Coral Gables High School, he was both a soccer and a football player before earning a scholarship from Auburn University. In his National Football League (NFL) career, which lasted seventeen years, he played for the Green Bay Packers, Arizona Cardinals, and Houston Oilers (later the Tennessee Titans) from 1984 to 2000. Del Greco played in some of the most famous games in NFL lore during his career, including The Comeback, the Music City Miracle, and The Tackle. 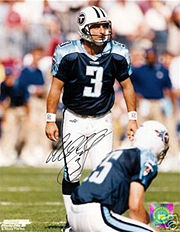 Al Del Greco in the NFL

A four-year letterman at Auburn, Del Greco completed 110 out of 111 PATs in his college career. He also set the SEC record for field goal attempts in a single game and field goals made in a single game in a 1982 game versus Kentucky where he made six out of his seven attempts. As of 2006, those 18 points still stand as a school record for most points scored by a kicker in a single game. His 236 career points place him fifth on the Auburn career scoring list.

At Spain Park High School in Hoover, Del Greco is the boys' golf coach and the football team's kicking coach. In 2003, Del Greco became Birmingham Steeldogs' kicking coach. As of 2006, he co-hosts "The Opening Drive" on WJOX in Birmingham with Jay Barker and Tony Kurre.

Del Greco was inducted into the Alabama Sports Hall of Fame in 2003. In 2011 he was awarded the Legend of Birmingham Award by the organizers of the Birmingham Bowl.

In 2013 Del Greco participated in a Golf Channel reality show, captaining a team of former NFL players in a benefit golf tournament in Puerto Rico. He was named head coach of the Samford Bulldogs golf team in 2014.