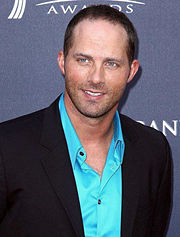 Barker's football career began at Hewitt-Trussville High School in Trussville where he played both quarterback and defensive back. He graduated in 1990.

Barker played college football at the University of Alabama, where he led the Crimson Tide to 35 wins, 2 losses and 1 tie (the best record of any quarterback at Alabama). On January 1, 1993 the Crimson Tide beat the top-ranked Miami Hurricanes in the Sugar Bowl to win a National Championship. Barker won the Johnny Unitas Golden Arm Award in 1994 and was a finalist for the Heisman Trophy that year. His father, Jerome Barker, died the following year. 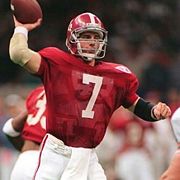 Jay Barker as quarterback of the Crimson Tide

Out of college, Barker was drafted by the Green Bay Packers in the 5th round of the NFL draft, but was released during training camp. He spent time on the rosters of the New England Patriots and Carolina Panthers, but never played in a regular season game. He signed with the Toronto Argonauts of the Canadian Football League for three seasons beginning in 1998 and appeared in 38 games before missing most of the 2000 season with injuries. As a CFL quarterback he amassed 3,433 yards on 269 of 472 passing with 11 touchdowns and 19 interceptions. He was released in 2001 and returned to Birmingham to play for the XFL's Birmingham Thunderbolts. He began the Bolts' single season as a backup to Casey Weldon, stepping in during the 5th game against the San Francisco Demons on March 3, 2001. He passed for the team's sole touchdown late in the 4th quarter of a 39-10 loss. He earned his first start on March 17 at Las Vegas, but failed to score in the 34-12 loss. He suffered a concussion during a sack at Chicago on March 25, ending his playing career.

In August 2001 Barker made his radio debut as co-host of "The Winning Edge" on WYDE-AM. Nine months later he resigned and moved to WJOX-AM (now WJOX-FM), joining Matt Coulter on "The Opening Drive" morning show. He currently co-hosts the show with former Auburn and NFL placekicker Al Del Greco and veteran deejay Tony Kurre. He is also involved in business ventures through FaithWorks which owns and operates two "Moe's Southwest Grill" franchises at the Vestavia Hills City Center and in the Colonial Promenade at Trussville, and a HomeVestors real estate franchise in Birmingham.

Barker married to his high school sweetheart, Amy DiGiovanna, in 1995 and had three children with her after adopting a boy. The couple divorced in 2007 and he is currently married to country singer Sara Evans. Their engagement was announced on March 24, 2008, and were married on June 14 in front of 145 guests. Their seven children served as attendants at the black and white affair in Franklin, Tennessee. Her son, Avery, walked her down the aisle. Their primary residence is in Birmingham with Sara's home in Franklin serving as their second home.

Barker was inducted into the Alabama Sports Hall of Fame in 2015.