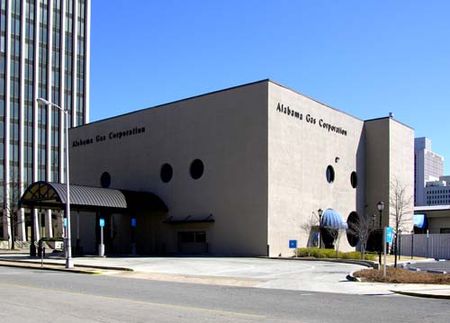 This article is about the present building on 20th Street South. For the former office, see 1918 1st Avenue North.

The Alagasco Building is a complex of buildings used by Alagasco at 20 20th Street South, across from the Daniel Building. The largest building, a former National Bank of Commerce branch office, was remodeled in the 1960s by architect Fritz Woehle with large, circular windows. Other buildings in the campus house the Alagasco Center for Energy Technology and a conference center.

In 2011 Alagasco commissioned a historicized redressing of the building's exterior, using synthetic stucco on a styrofoam backing to create cornices and pilasters. Williams Blackstock Architects prepared the redesign, which won approval from the Birmingham Design Review Committee.