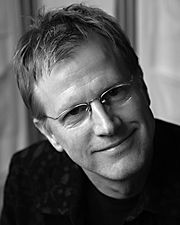 Alan C. Hunter (born February 14, 1957 in Birmingham) was one of the original five video jockeys (VJ's) on MTV from 1981 to 1987. He currently heads the production company Hunter Films, which he formed with his brother Hugh. He is also one of the founders of WorkPlay, a multipurpose office, studio and entertainment facility in Birmingham.

Hunter graduated from Mountain Brook High School in 1975 and earned his Bachelor's degree in 1979 from Millsaps College in Jackson, Mississippi. He pursued acting for a while, earning a role in the video for David Bowie's "Fashion" before being tapped as the last of five on-air announcers to join the upstart MTV network.

MTV went on the air on August 1, 1981 at midnight in selected markets. Hunter was, by accident, the first VJ to appear on screen, with the words "And I'm Alan Hunter. Let's get to it". During his first month with MTV he kept his regular job tending bar at New York's Magic Pan. When a customer recognized him, he left bartending and became a full-time VJ -- attending concerts and parties until the wee hours and then coming back to the studio at 8:00 AM for a full day of taping interviews, promos and features. Hunter distinguished himself by pushing for more remotes and road trips rather than in-studio interviews. He stayed with the network for seven years and, unable to find other work in the industry, moved back to Birmingham and, with his brothers, founded WorkPlay.

Hunter co-founded Birmingham's Sidewalk Moving Picture Festival and serves as its board president. He helped launch the civic activism group Catalyst4Birmingham. In 2005 he was named "Communicator of the Year" by the Birmingham chapter of the International Association of Business Communicators. He has lobbied for the creation of a regional film promotion group, now realized as the Birmingham-Jefferson Film Office.

Hunter also hosts an 80s music channel on Sirius Satellite Radio and the "Looking for the Stars" reality show on the Starz network. He has also done voiceover work for Verizon Wireless radio spots.

Hunter had two children, Callie and Dylan, with his first wife. He married the former Elizabeth Bradley of New York, New York on July 7, 2007. In 2010 he received the Alabama Music Hall of Fame's Media Award.