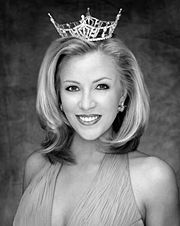 Alexa Jones (born c. 1981 in Andalusia, Covington County) is the co-host of WIAT's morning show Wake Up Alabama and was Miss Alabama 2005.

Jones graduated from Birmingham-Southern College and was crowned Miss BSC in 2003. She went was accepted into UAB and worked towards her master's in art history. She won the Miss Alabama pageant in 2005 and was 2nd runner up in the Miss America pageant.

Jones joined CBS 42 in July 2007. Since that time she has co-hosted Wake Up Alabama with Anna Donaldson. Along with the morning show, Jones covers sports for the station and has appeared on round table discussions for local sports radio shows.

Jones is also the founder and chairperson for the Renaissance Foundation of Alabama, an arts education non-profit organization.