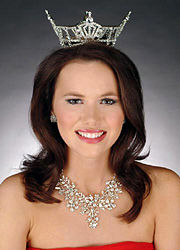 Melinda Toole Gunter (born c. 1984 in Birmingham) was Miss Alabama 2006 and Miss Samford University. She won the pageant on her third attempt on June 10, 2006 over first runner-up Katie Boyd of Pelham and second runner-up Julia McNeese of Montgomery. The pageant was held at the Wright Auditorium at Samford.

For her talent, Toole sang "Time to Say Goodbye" in English and Italian. Her proposed platform is "character education". With the win, she earned a $10,000 scholarship and entry into the Miss America pageant in January 2007.

As Miss Trussville she assisted in implementing the "Character Counts" program at Fort Dale Academy in Greenville and Payne Primary School and Payne Intermediate School in Trussville.

Toole graduated from Samford University with a degree in elementary education. She is the daughter of Ann and Donald Toole of Birmingham and a graduate of Pinson Valley High School. She is a member of Northpark Baptist Church in Trussville.