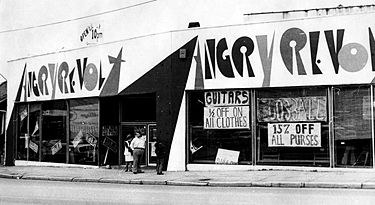 The Angry Revolt in Homewood

Forbes planned a coffee shop and hippie hangout which would help cultivate a generation of liberal leaders in Birmingham. He opened the first store on The Curve in Homewood in 1972. His intention was thwarted when Homewood officials declined to approve a business license for a coffee shop, so he stocked record albums, guitars and alternative newspapers and operated as a retail store.

He expanded retail offerings with waterbeds, clothing and smoking paraphernalia, and encouraged people to hang out by installing foosball tables. By 1973 two other locations had opened on 1st Avenue North in Woodlawn and on the Bessemer Super Highway in Midfield.

Forbes was arrested seven times on various minor charges, all dismissed. The gas crisis of the mid-1970s doomed the business as his most profitable item, water beds, became prohibitively expensive and his core clientele, young people, had less disposable income. All locations were closed by 1974 and Forbes moved to California.