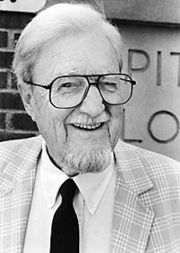 Bunyan Davie Napier (born July 12, 1915 in Kuling (Kushan), China; died February 24, 2007 in Claremont, California) was a minister and activist who taught at the Yale School of Divinity and served as president of the Pacific School of Religion in Berkeley, California.

Napier was born to Doctor Augustus Y. Napier and his wife, Lois, who had met while he was pastor of Auburn Baptist Church and married in Japan prior to his arrival in China as a Southern Baptist missionary. He and his brother, Campbell spent their childhood in China and Japan before the family returned to Birmingham. He graduated from high school here and went on to complete an undergraduate degree at Howard College in 1936.

Napier joined the faculty of his alma mater at the Yale School of Divinity in 1949, and was appointed the Holmes Professor of Old Testament Criticism and Interpretation in 1956.

During the early 1960s, Napier served as Master of Yale's Calhoun College. In 1966 he left to teach at Stanford University in California. He participated in demonstrations opposing American involvement in Vietnam, and also returned to the South to participate in Civil Rights Movement demonstrations. He officiated at the 1967 marriage of Peggy Rusk, the daughter of Nixon's Secretary of State, to African American Air Force Reserve officer Guy Smith in Palo Alto, California.

Napier left Stanford in 1972 to accept the post of president of the Pacific School of Religion in Berkeley. He left that position in 1978 and returned to Yale in 1980 as Professor of Bible and Ministry. Throughout his career, Napier traveled extensively as a visiting professor and guest lecturer, including periods at Judson College in Marion, Alfred University in Alfred, New York, and the University of Georgia.

Napier died in 2007 and was survived by his daughter Anne, three granddaughters and three great-grandchildren.