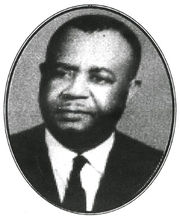 Bishop Martiene "Fess" Montgomery (born in Evergreen, Conecuh County) was the principal of Rosedale School from 1926 to 1967. He also served on the executive committee of the Alabama State Teachers Association.

Montgomery was he son of Edward Perkins Montgomery Sr and Queen Esther Perkins Jackson of Germany in Monroe County. HIs family moved to Rosedale in the early 1920s. As principal of the Rosedale School, Montgomery created a positive atmosphere bounded by strict discipline. African American families from across Shades Valley sent their children. Montgomery petitioned the Jefferson County Board of Education to provide bus service. When the student body outgrew the basement of the house where they had been eating lunch, he petitioned for a cafeteria, which, due to financial constraints, was combined into a "cafetorium" which also served as the school's auditorium.

Montgomery's house was located at 2703 Loveless Street. It was later named B. M. Montgomery Street in his honor.