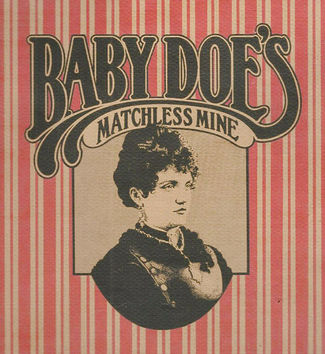 Logo for Baby Doe's Matchless Mine

Baby Doe's Matchless Mine was a theme restaurant at 2033 Golden Crest Drive atop Red Mountain near The Club and Vulcan.

The chain was named for Elizabeth McCourt "Baby" Doe Tabor (1854–935), the young bride of Central City, Colorado mine owner Harvey Doe. After that marriage failed, she was romanced by millionaire Colorado Lieutenant Governor Horace Tabor. Tabor left his wife and moved with Baby to Leadville where he bought the "Matchless Mine", a silver mine named for a brand of chewing tobacco. The value of silver plunged after 1893, causing the Tabors to plunge into poverty. Tabor was appointed Postmaster of Denver and counseled his bride to, "Hang on the the Matchless. It will make millions again. Several years after Tabor's death in 1899, Baby returned to Leadville and futilely focused her attention on reopening the mine. She was found dead of exposure in her cabin in 1935, having exhausted her supply of firewood. Her story inspired two books, a Hollywood film (Silver Dollar, 1932), and an opera (The Ballad of Baby Doe, 1956)

Like its siblings, the 550-seat Birmingham restaurant was sited to take advantage of panoramic views, specifically of Birmingham's skyline. The building was held up by piers, and was made of weathered wood and tin roofing from old buildings in Tennessee and Arkansas. It featured 10 dining rooms, a simulated mine tunnel and a downstairs lounge-cabaret that included a bar and an illuminated dance floor. The menu featured broiled steaks, seafood, ribs and roast duck. Many patrons developed an attachment to the restaurant's beer cheese soup.

On August 10, 1983, Wanda Jones was abducted from the Baby Doe's parking lot during a private party, and taken to a house in Pinson where she was raped by several men. Three men, Stanley Wilson and brothers Kenneth and Michael Thornton, later pleaded guilty and were convicted of the crimes against Jones. Publicity about the case negatively impacted the restaurant.

Baby Doe's roof was severely damaged in the March 13 blizzard of 1993, and the restaurant subsequently closed for good. The building was later torn down.

In 2000, Specialty Restaurants of Anaheim, California attempted to obtain a permit to build Red Mountain Restaurant on the site. After a year and a half of delays, Specialty withdrew its plans. The Club purchased the 6 1/2 acre site on August 8, 2002 for $625,000.