This article is about the football coach and sports marketer. For other usages, see Bill Battle. 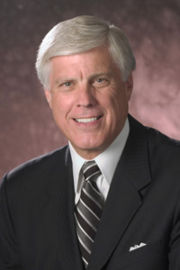 Battle played football at the University of Alabama from 1960 to 1962 and was part of Bear Bryant’s first national championship team in 1961. After graduating, he entered the coaching profession at the University of Oklahoma. From 1964 to 1965, he served a two-year military tour for the Army at the United States Military Academy at West Point while as an assistant coach. In 1966 he moved to the University of Tennessee, where he served as an assistant coach for four years until he was named head coach in 1970. At the time he began as head coach at age 28, he was the youngest college head coach in the country. Battle resigned from Tennessee in 1976, after amassing an overall record of 59-22-2. His .718 winning percentage ranks him as the 13th winningest SEC coach of all time.

Battle is the founder and chairman of the Collegiate Licensing Company. In 1981, while working for Golden Eagle Enterprises in Selma, Battle signed Bryant to a licensing agreement. The University of Alabama signed on as CLC’s first university client. In 1983, Battle moved the newly-formed company to Atlanta where it resides today.

Battle is a member of the group that votes in the Harris Interactive College Football Poll.

In 1981, Battle was inducted into the Alabama Sports Hall of Fame. Battle was the first member inducted into the National Collegiate Licensing Assocation Hall of Fame in 2000. He was awarded the 2005 Paul W. Bryant Award from the University of Alabama. He served on the boards of Collegiate Images and Birmingham-Southern College, whose Panthers basketball teams play in the Bill Battle Coliseum, named for his father, Bill Battle, Jr.

On March 22, 2013, the executive committee of the University of Alabama System Board of Trustees unanimously approved the hiring of Battle as Alabama's athletic director only two days after the resignation of Mal Moore. Battle signed a four-year contract. During his tenure, Battle relieved head men's basketball coach Anthony Grant of his duties and hired Avery Johnson to replace him. Battle was forced to take a leave of absence in Summer 2016 while battling multiple myeloma. After his term ended in early 2017 University of Arizona athletic director Greg Byrne succeeded him in Tuscaloosa.