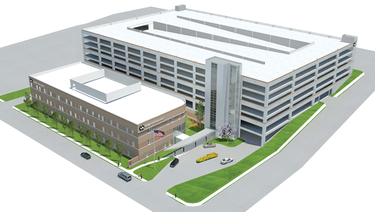 Rendering of the clinic and parking deck

The Birmingham Veterans Administration Primary Care Annex and parking deck is a 70,000 square foot medical clinic and 2,334-space parking deck constructed by Graham & Company and the Molasky Group of Las Vegas, Nevada for long-term lease to the U.S. Department of Veterans Affairs. It occupies the entire block between 24th and 25th Street and 7th Avenue South and University Boulevard in Southside.

The new facility provides space for primary care services formerly operating from the Birmingham VA Medical Center, and replaces a number of surface parking lots around the medical district that had been leased by the VA. The design of the center was commissioned from Page Southerland Page of Austin, Texas, and the $66 million construction contract was awarded to B. L. Harbert Construction. The three-story brick-clad clinic building backs up to 7th Avenue, with its entrance on the west side, accessed from a covered walkway connecting to the parking deck and separated by a landscaped "healing garden" visible from the lobby. The 8-level pre-cast concrete deck shades the garden, and is accessed at different levels of the sloping site. Its bulk is partly-obscured by trained plantings facing University Boulevard.

The project was substantially completed in December 2015 and held a formal ribbon-cutting on January 19, 2016. It was designed to qualify for silver level certification from the U.S. Green Building Council's Leadership in Energy & Environmental Design (LEED) program.