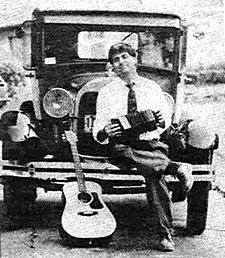 Robert E. Tedrow (born c. 1953 in Fort Collins, Colorado) is the owner of the Homewood Musical Instrument Co. and a luthier, best known for his custom-made concertinas.

Tedrow grew up in a family of musicians and learned how to play a variety of instruments, idolizing his grandmother, Belle Hest, a jazz pianist. He built a banjo at age 15 and took up with the house band at a local Shakey's Pizza. As a teenager he focused on guitar and played in church folk groups during the "folk scare" of the 1960s. He studied occupational therapy at Colorado State University and worked for a while in North Carolina before realizing he was better at working with instruments. He and his wife, Klari, moved to Birmingham in 1986 while she completed a degree at the Cumberland School of Law.

Tedrow opened a workshop behind Fretted Instruments at 2906 Linden Avenue in Homewood. In 1989 he opened his present business, Homewood Musical Instrument Co., at 3027 Central Avenue next door to Nabeel's Café & Market. He drives a 1928 Model A Ford is to work each day.

When Tedrow's prized concertina wore out, he took the time to learn to rebuild it and is now one of only three concertina makers in the United States, with clients around the world.

In 2016 Tedrow expanded his business at a new location on 28th Avenue South.