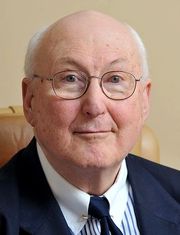 H. Brandt "Brandy" Ayers (born April 8, 1935; died May 3, 2020) was the chairman of Consolidated Publishing, publisher of the Anniston Star, Talladega Daily Home, The Cleburne News, The News-Journal and The St Clair Times.

Ayers was the son of Harry Ayers, founder of the Star. He attended Woodstock Elementary School and then went to boarding school in Connecticut. He attended the University of Alabama and served as an officer in the U.S. Navy. After his discharge he covered Washington D.C. for the Raleigh Times and later for the Bascomb Timmons Bureau wire service.

When he took over as managing editor of the Anniston Star in 1965, Ayers led the paper, already recognized for its progressive viewpoint on national politics, to disabuse itself of skepticism over racial integration. He was a founding member of Anniston's bi-racial Committee on Unified Leadership. He was one of the state's most prominent critics of George Wallace, who took to referring to the paper as "The Red Star". Ayers reflected in his 2013 autobiography that, "to be liberal in the Lower South is to know a deep, double loneliness: An object of condescension to the 'other' America and yet never fully accepted by your own." His outlier status earned him a national audience, though, and he frequently gave commentary on National Public Radio.

Ayers has had a long interest in supporting the training of prospective journalists and had success recruiting graduates from Ivy League programs to work in Anniston. He was a founder of the Alabama Press Association Journalism Foundation and established an Ayers Family Institute for Community Journalism in 2002. For that work he was presented with an "Editorial Leadership Award" from the American Society of Newspaper Editors. He also supported civic efforts, including the fledgling Alabama Shakespeare Festival.

In January 2018 Ayers was publicly accused of having spanked female reporters in the 1970s. He admitted to spanking one, citing his "youth" and a physician's advice as mitigating circumstances for the offense. He resigned from his chairmanship of the Consolidated Publishing Company, and was succeeded by his wife, Josephine.