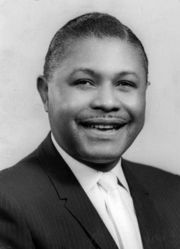 Clarence was the son of Willie and Rachel Pittman Walker, sharecroppers in western Mississippi. His father left shortly after returning home from World War I and he adopted his step-father's name after his mother remarried, to Henry Franklin. The family moved to Cleveland, Mississippi where he was ordained as a minister at age 16 and soon began more than a decade of preaching on the Black circuit around the South. He married the former Alene Gaines in October 1934, but the marriage did not survive and he married again, to Barbara Siggers, on June 3, 1936. That union brought him four children between 1938 and 1944, as well as Barbara's son from a previous marriage.

His stop in Birmingham came during the late 1930s or early 1940s, before he settled into the pulpit of New Salem Baptist Church in Memphis, Tennessee. It was in Memphis that Franklin fathered a daughter with a 12-year-old girl from the congregation. Aretha was born in Memphis in 1942.

In 1944 Franklin moved to Buffalo, New York as pastor of Friendship Baptist Church for two years. In 1948 he split up with Barbara. She returned to Buffalo with her older son and he kept custody of their other four children. In 1956 he founded New Bethel Baptist Church in Detroit where he would spend the next 33 years. Under his leadership New Bethel launched ministries for the hungry, the homeless, and those serving in prison. The growing congregation moved to a 2,200-seat former cinema on Linwood Boulevard in 1961.

Known as the "the man with the golden voice," or with the "million dollar voice", Franklin continued to travel around the country to speaking engagements, and was also one of the first ministers to have his sermons recorded onto vinyl albums (at Chess Records) and broadcast over the radio. He combined preaching with singing, and brought his daughter, Aretha, with him on tour in the 1950s. As a leader of the community and a personal friend of Martin Luther King, Jr, Franklin became involved in Civil Rights movement in the 1960s, especially with regard to discrimination against African-American members of the United Auto Workers union. He served on the executive board of the Southern Christian Leadership Conference and was among the organizers of the Walk Toward Freedom March in 1963.

Franklin's tours came to include other gospel singers, including Clara Ward, who became romantically involved with him. Her presence, as well as frequent contact with Mahalia Jackson, helped to shape Aretha's vocal style.

In June 1978 Franklin was shot twice at his home in Detroit. He spent five years at home in a coma, monitored by a full-time nurse. He spent his final six months at the New Light Nursing Home before he died in 1984. He is buried at Woodlawn Cemetery in Detroit. Detroit Mayor Coleman Young renamed Linwood Boulevard and another city park near his former home in Franklin's honor.