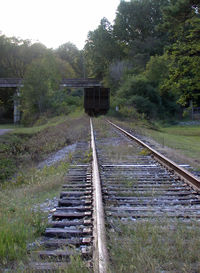 The Cane Creek Branch (also spelled Cain Creek Branch) was a rail line constructed by the L&N Railroad to serve mines in the Brookside and Coalburg communities. It was built in 1903 and started at the Black Creek Junction on the main line north of Birmingham in Fultondale. It passed through Fultondale, Gardendale and ended near Brookside. There were a number of trestles along the line to span various creeks and valleys, the largest of which was the 650' long Newfound Creek Trestle. It spanned over Newfound Creek between Bailey's Quarters and Crocker Junction, northeast of Brookside. The trestle burned down on May 23, 2006. There is one, small trestle still visible along the line in Fultondale adjacent to Black Creek Park.

CSX abandonded the rail line in 2003 and the tracks were subsequently removed. Fultondale converted a 3.5 mile segment of the rail bed into a walking trail in the mid-2000's that is part of the Five Mile Creek Greenway. In 2019, a two mile segment of the Five Mile Creek Greenway in Gardendale was opened along the old rail bed. The abandoned rail line was part of the Birmingham Mineral Railroad and there are markers at various points along both the Fultondale and Gardendale segments of the greenway trail.

Segment of the Cane Creek Branch rail line in 1908