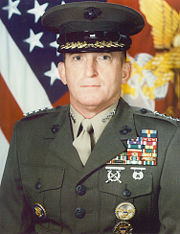 Charles Chandler Krulak (born March 4, 1942 in Quantico, Virginia) was the 31st Commandant of the United States Marine Corps and served as the 13th president of Birmingham-Southern College from 2011 until his retirement in May 2015.

Krulak, the youngest son of Lt. General Victor H. Krulak, attended Phillips Exeter Academy in Exeter, New Hampshire and graduated from the United States Naval Academy in Annapolis, Maryland in 1964. He later earned a master's in labor relations at George Washington University and completed programs at the Amphibious Warfare School, the Army Command and General Staff College, and the National War College.

Krulak commanded a platoon and two rifle companies during two tours in the Vietnam War. In 1966 he was named commanding officer of special training branch and recruit series at the Marine Corps' recruit depot in San Diego, California. In 1970 he commanded the Counter-Guerilla Warfare School at the Northern Training Area on Okinawa, but soon left to become a company officer at the Naval Academy. In 1973 he was made CO of the Marine Barracks at the Naval Air Station at North Island, California and was promoted to Chief of the Combat Arms Monitor Section at Marine Headquarters in Washington D. C. in 1978 and Commander of the 3rd Battalion 3rd Marines in 1983.

Krulak was made Deputy Director of the White House Military Office in 1987 and rose to the rank of Brigadier General two years later. He was assaigned to Camp Lejeune, North Carolina to command the 10th Marine Expeditionary Brigade. In 1990 he was placed in command of the 2nd Force Service Support Group, which was active in the Gulf War. In 1991 he was made Assistant Deputy Chief of Staff for Manpower and Reserve Affairs at Marine Headquarters. He reached the rank of Major General in 1992 and commanded the Marine Corps Combat Development Command at Quantico, Virginia, soon rising to Lieutenant General. In 1994 he was named Commander of Marine Forces Pacific, then nominated in 1995 to serve as Commandant of the Marine Corps.

Krulak was promoted to General and assumed the duties of Commandant from General Carl Mundy, Jr on June 30, 1995. He was relieved on June 30, 1999 by General James L. Jones. During his Marine Corps career, Krulak developed basic strategic concepts for modern battlefields, based on US experience in Somalia, Haiti and Bosnia. He rewrote the Marines' basic "Warfighting" manual and was dubbed "Warrior Prince of the Corps" by Tom Clancy. Krulak headed the fund-raising drive the provided $150 million for the U. S. Marine Corps Museum that opened in 2006.

After leaving the Corps, Krulak accepted an executive position with MBNA America and spent four years as Senior Vice Chairman and CEO of MBNA Europe, based in Chester, England. He retired in 2005 and joined the board of the Aston Villa Football Club in Birmingham, England, owned by Randy Lerner, son of MBNA's former chairman. He participated in Aston Villa fan message boards and was affectionately called "The General" by fans. He has also served on the boards of Conoco, ConocoPhillips, Union Pacific, Phelps Dodge, and Freeport-McMoRan Copper & Gold.

Krulak was nominated as a candidate for President of Birmingham-Southern in 2010, but was not among the top nine candidates invited to campus for interviews. He did visit the campus while in town to receive the National Veterans Award from National Veterans Day in Birmingham that November. When Rodney Ferguson turned down BSC's offer, Krulak again became a candidate. He was named President of Birmingham-Southern College on March 21, 2011.

Recognizing the college's ongoing financial problems, he declined a salary and car during his first two years. He immediately made an impact as a dogged promoter of the school and a personable leader. He worked long hours without days off and is credited with raising $12.5 million to reduce debt and rebuild the college's endowment. In December 2014 Krulak announced his retirement for the following May. He was inducted into the Birmingham Business Hall of Fame and the Alabama Academy of Honor in 2015.

Krulak and his wife, Zandra, have two sons, David and Todd.