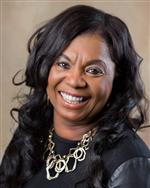 Gardner graduated from Minor High School in 1979. She earned a bachelor of arts at Spelman College in Atlanta, Georgia in 1982, a banking degree from Louisiana State University in Baton Rouge, and a law degree at Miles College. She married fellow funeral director Paul Gardner on June 7, 1986.

Gardner applied to fill the vacancy left by the resignation of Carole Smitherman in Birmingham City Council District 6 and was named a finalist, but no appointment was made prior to the 2013 Birmingham municipal election. In that race, Gardner campaigned successfully for the open Birmingham Board of Education seat for District 6.

As acandidate, Gardner pledged to increase parental involvement and help improve the functioning of the board and its relationship with the Superintendent of Schools.