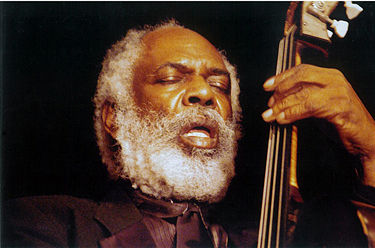 Cleveland "Cleve" Josephus "Sonny" Eaton II (born August 31, 1939 in Fairfield; died July 5, 2020 in Birmingham) was a jazz bassist, composer, arranger and record producer. He was widely regarded as one of the greatest jazz bassists of all time, and his 1975 recording "Plenty Good Eaton" is also considered a funk classic.

Eaton was born in Fairfield in 1939 and made a prodigious start as a child musician, mastering his mother's piano, the trumpet, and the saxophone before teacher John Springer introduced him to the tuba and string bass in high school. Eaton immersed himself in the working world. By the time he was in 9th grade, he was a star for Leon Lucky Davis & the All-Stars, and had bought his own new 1955 Victoria Spatz roadster with cash earned as a musician.

Eaton played in a jazz group at the Tennessee A & I State University (now Tennessee State University) in Nashville while earning his bachelor of music degree, then moved to Chicago, hooking up first with the Ike Cole Trio. After a while he was asked to join the Ramsey Lewis Trio, with whom he went on to make 30 recordings over the next 10 years.

In the mid-1970s Eaton began exploring fusion on his own, releasing a few recordings on the Black Jazz label and Ovation. In 1979 Eaton filled in for a couple of weeks with the Count Basie Orchestra, but quickly earned the position of "the Count's Bassist" and remained with the group for the next 17 years. 1979 also saw his induction into the Alabama Jazz Hall of Fame.

While touring with Basie's orchestra, Eaton recorded numerous albums and toured all over the world at breakneck pace. He moved back to Birmingham in 1985 and became director of the UAB Jazz Ensemble for UAB's Department of Music. He also formed several groups of his own, such as the Garden of Eaton, the Cleve Eaton Orchestra, and, in 1974, the R&B-flavored ensemble Cleve Eaton & Co. He currently performs with his band Cleve Eaton and the Alabama All Stars.

Locally, Eaton performed with Robert Moore & the Wildcats, the Magic City Jazz Orchestra and Ray Reach. His own ensemble performed as Cleve Eaton and the Alabama All Stars.

Eaton's wife Myra managed bookings for Cleve and others through her CeeMe Productions. A benefit concert with proceeds to assist Cleve Eaton with his expenses for oral cancer treatment was held in 2009 with Eaton and his Alabama All Stars performing. In January 2011, Myra Eaton reported via his website that he was cancer-free. Eaton died on July 5, 2020, in Birmingham. He was 80, and had been hospitalized during the last four months of his life. He was survived by his wife and six of his eight children, along with nine grandchildren and eight great-grandchildren.

Eaton was buried at Elmwood Cemetery.

Cleveland Eaton was inducted into the Alabama Music Hall of Fame on February 22, 2008, having first been nominated in 1993. He also has a Bronze Star in the Hall's Walk of Fame. Eaton’s other honors include his induction into the Alabama Jazz Hall of Fame, the Playboy Jazz Poll, Canada’s Cultural Enhancement Award and the Achievement Award at the Count Basie Tribute Concert. He received the Governor’s Arts Award 1995 (Alabama) and the Don Redman Lifetime Achievement Award in 2004.

His recording of "Bama Boogie Woogie" became a phenomenal best seller in the United Kingdom, Germany, Switzerland, France, and Australia. In his ten years with the Ramsey Lewis Trio, there were four gold singles, including "Hang on Sloopy" and "Wade in the Water" and four gold albums, including Solar Wind and Sun Goddess. He performed on at least one Grammy-award winning album with the Count Basie Orchestra.

With the Ramsey Lewis Trio

With the Count Basie Orchestra