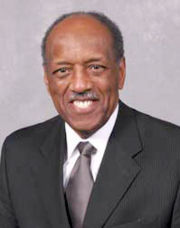 Hammonds grew up in Alton, Illinois and was a basketball player at his high school. He graduated from Southern Illinois University Carbondale with a bachelor of arts in history in 1958. There he met Yvonne Parks, marrying her in 1959. He completed his master of science in guidance and counseling at SIU Edwardsville in 1963 and a doctorate in education from the University of Illinois.

Hammonds immediately began meeting with neighborhood, civic and business groups to bolster support for the school system. He developed a plan to close and reorganize schools and made a practice of spending the system's reserve funds to hire additional teachers. He was popular for most of his tenure, but the system's dwindling reserves led the board to force him out in 1994.

In 1996 Hammonds was hired as superintendent of St Louis, Missouri's public schools. He retired from there in 2003 and began teaching education administration classes at Southern Illinois University in Edwardsville. He collapsed just before a scheduled class there in September 2010 and died shortly afterwards at Anderson Hospital in Maryville. He was survived by his wife and three daughters and was buried in St Louis.