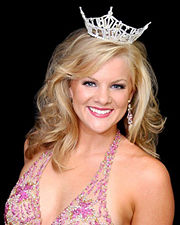 Porter is a 2005 graduate of Clay-Chalkville High School. She attended Auburn University and was a four-year member of the Tiger Paws dance team and also performed with the Birmingham Ballet Company. She earned her undergraduate degree in communication at Auburn in 2009 and is employed as a tap dance instructor at The Pointe Dance Arts in Hoover.

Porter has competed in pageants since 2003 and has been crowned Miss Clay-Chalkville, Miss Talladega County, Miss Smiths Station, Miss Chattahoochie Valley, Miss Painted Rock and Miss Leeds Area. She finished third in the 2009 Miss Alabama pageant, and was recognized as "Miss Congeniality". She followed that with a top-10 finish in 2010 before winning the 2011 Miss Alabama competition. Her service platform involves working with the Boys and Girls Clubs of America.