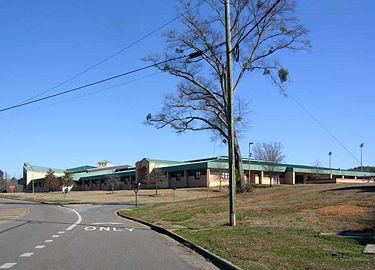 Clay-Chalkville High School (CCHS) is a four-year public high school in the Birmingham suburb of Clay. It is the second largest of the Jefferson County Board of Education's fourteen high schools. School colors are blue and silver, and the athletic teams are called the Cougars. CCHS competes in AHSAA Class 6A athletics.

As a result of overcrowding in Hewitt-Trussville High School during the mid-1990s, the Jefferson County School System decided to build it first new, not replacement, school to accommodate the rapidly growing areas of northeast Jefferson County.

In fall 1995 a newsletter was distributed to families living within the area zoned for the new Clay-Chalkville schools still under construction. As part of the newsletter, residents were asked to help in deciding the name of the newly constructed school. The options given were Clay, Clay-Chalkville, and Deerfoot for both the new middle and high schools. Clay-Chalkville was eventually chosen and announced in early 1996.

The CCHS campus was constructed in 1996 at a cost of $15 million and is located at 6623 Roe Chandler Road on the border of Clay and Pinson. It was designed by Volkert & Associates with B. L. Harbert International serving as its general contractor.

The 179,000 square foot building includes 53 classrooms, four computer labs, four science labs, and a full cadre of arts and athletics facilities. The 9,880 sq. ft. media center is a focal point for the school and includes a time capsule placed by the Class of 2001. It overlooks an outdoor amphitheater through a curved wall of windows. The 650-seat auditorium has a fully complemented stage with fly tower and scene room.

The adjacent football stadium features the seating salvaged from the former Shades Valley High School in Homewood. The school also has fields for baseball and softball.

The school's alleged use of an ineligible player during the 2011 football season prompted the AHSAA to forfeit 9 of the team's victories.