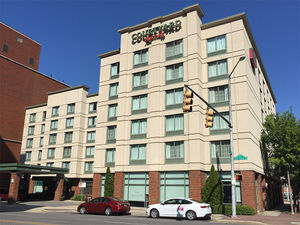 Courtyard by Marriott Hotel at UAB

The Courtyard by Marriott Birmingham Downtown at UAB is a full-service hotel at 1820 5th Avenue South in the UAB Medical Center. The 6 story, 115-room hotel connects to the UAB North Pavilion by way of a pedestrian bridge. It also features 1,982 square feet of meeting space a 5th Avenue Bistro restaurant and bar, as well as an in-house fitness center, plus guest access to the UAB Fitness Center.

The hotel was developed by Atlanta, Georgia's Noble Investment Group. It was designed by Atlanta's Cooper Carry architects and built by Pride Construction of Piperton, Tennessee. When the hotel first opened in August 2005 it had 122 guest rooms and 2,200 square feet of meeting space. Before the end of the year the hotel was sold for $10.5 million to a subsidiary of RLJ Development, a real estate company owned by Black Entertainment Television founder Robert L. Johnson.

The subsidiary, later renamed IA Urban Hotels Birmingham LLC, continued to own and operate the hotel for the next decade. In late 2011 IA exercised an option to purchase the land, previously leased from the UAB Educational Foundation, for $1.55 million.

David Rookard was named general manager of the hotel in December 2014.

In February 2017 the University of Alabama Board of Trustees approved a deal for UAB to purchase the hotel for $30 million and contract with the Pyramid Hotel Group to operate it.