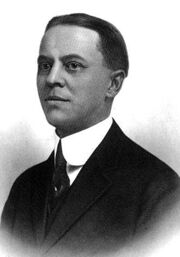 Crawford Toy Johnson Sr (born May 20, 1873 in Danville, Virginia; died December 9, 1942 in Birmingham) was the founder of the Birmingham Coca-Cola Bottling Co.

Crawford was the fourth of seven children born to John Lipscomb and Julia Anna Toy Johnson of Virginia. He grew up in Mississippi.

Johnson secured rights to Coca-Cola distribution in Birmingham from the Chattanooga Coca-Cola Bottling Co. in 1902. He established an office in a row of saloons at 109 24th Street North with one employee, Sam Whitt, and one mule, Sara. By 1916 his business was the largest Coca-Cola bottler in the world, and it was said that, "the firm employed six men who did nothing but count the money and take it to the bank."

After his sons, Crawford Jr and Allen joined the firm in the 1920s, the senior Crawford began acquiring additional franchises in nearby markets. He also became active in civic affairs, leading the Birmingham Rotary Club and chairing the first Birmingham Community Chest.

When they volunteered for military service in World War II, Johnson resumed day-to-day management of the company. When he died in December 1942 his widow, Caroline took over through the end of the war.

Johnson is interred in a family mausoleum at Elmwood Cemetery. He was inducted into the Alabama Business Hall of Fame in 1977.