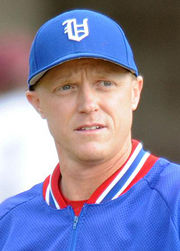 Davis was chosen by Sammy Dunn to succeed him as coach for the 2004 season. Over the next eight years, his teams won at least 19 games each year and qualified for the state playoffs seven times. His 2009 team went to the state semifinals. He resigned from the head coaching position to spend more time with his own sons and focus on his Christian faith.