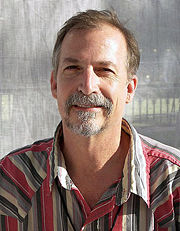 Daniel Wallace (born 1959 in Birmingham) is a novelist, best known for his 1998 novel Big Fish: A Novel of Mythic Proportions, the basis for the Tim Burton film Big Fish. His other books include Ray in Reverse, The Watermelon King: A Novel, and Mr. Sebastian and the Negro Magician.

Wallace and his three sisters grew up in Birmingham, experiencing what he described as an uneventful childhood, "completely average in every way". His father, E. D. Wallace, founder of Wallace International, an import-export firm, often told them that he didn't want to be "a big fish in a small pond" and used jokes and tall tales to encourage his children and deflect intimacy. Wallace credits the presence of Vulcan on Red Mountain during his childhood as fostering his interest in mythic stories.

After graduating from the Altamont School, Wallace attended Emory University in Atlanta, Georgia for two years, then transferred to the University of North Carolina at Chapel Hill, studying business. His first job, during school, was as a veterinary technician. He left college in 1982 to take a job with his father's company, working from Nagoya, Japan:

"My father wanted me to work with him in his company, an import/export firm, and to that end I lived in Japan for a couple of years. But it didn’t work out. It didn’t make me happy and the truth is I wasn’t that good at it. I wouldn’t have been a good businessman. I tried. So I quit – or, if he were alive and you could ask him, fired – and started writing. He wasn’t for it but then it’s hard to support a child in an endeavor for which he has shown absolutely no promise. My mother loved the idea of it because being a writer is such a romantic idea and because it hurt my father, and if he was hurt she was happy." (Shneider-2008)

The elder Wallace cut his son off at that point, and the two became estranged. After returning to North Carolina in 1984, Wallace began to pursue writing. He taught Japanese language courses, took a job in a bookstore and served as assistant director of a local literacy council. He married artist Karen Floyd and contributed illustrations for greeting cards, t-shirts and refrigerator magnets distributed by her K. Floyd Designs. That marriage, which produced his son, Henry, ended in divorce.

Setting out to write novels, Wallace suffered through the rejection of four or five manuscripts. His sister, Rangely, an attorney, found a publisher for her first novel before he did. Soon after completing Big Fish in 1997, E. D. died from complications following a quadruple bypass.

Of his early writings, Wallace claims:

"I thought I was a much better writer then than I do now. I loved the stories I was coming up with, and was really amazed I could put enough sentences together to make a paragraph. It was like magic, seeing the little black marks all come together. I sound like I’m making fun of myself but I’m not. If a writer writes I was a writer. I couldn’t see very far beyond that though. The pure pleasure of invention, of making stuff up, clouded over everything else. I couldn’t tell the difference between a good story and a good story told well. I wrote three hundred pages about a pair of billionaire twins, each weighing just over 500 pounds, who ‘rent’ the mistress of one of their friends. What did I think was going to come of that? Nothing much did. And I wrote a few other books equally as promising. As I wrote I was learning to write (having not gone to school) and I was learning what not to write as well. I also finally figured out that I was writing the kind of books I thought other people wanted to read, not the kind I wanted to write. That’s when Big Fish happened, and why it was a breakthrough for me." (Shneider-2008)

He did not expect the book to be adapted for film, joking that "if you asked me then, I would have said it had as much chance of becoming a movie as becoming a car." (Minzesheimer-2004) Screenwriter John August championed the adaptation of Big Fish for cinema and worked on the screenplay before Tim Burton was recruited as director.

In 2001 Wallace married social worker Laura Kellison. He is currently J. Ross MacDonald Distinguished Professor of English at the University of North Carolina. He completed his bachelor's degree in 2008 and remains in Chapel Hill with his family, writing fiction and screenplays. Another daughter, Lillian Bayley Hoover, is an artist working in Baltimore, Maryland.