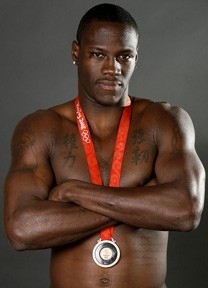 Deontay Leshun Wilder (born October 22, 1985 in Tuscaloosa) is a former World Boxing Council world heavyweight champion and United States Amateur Heavyweight Champion national Golden Gloves champion. He was the only American boxer to medal at the 2008 Summer Olympics. His nickname, "The Bronze Bomber," was inspired by his third-place finish.

Wilder graduated from Tuscaloosa Central High School in 2004 and dreamed of playing football or basketball for the hometown Crimson Tide, but academic issues forced him to work on his grades at Shelton State Community College. Wilder and his wife, Jessica, had a daughter, Naieya, who was diagnosed with spina bifida. He took a job as a truck driver for Greene Beverage Company to support his new family.

Wilder began to train as a boxer at Jay Deas' Skyy Boxing gym in October 2005 and soon came under the tutelage of trainer Ace Miller of Knoxville, Tennessee. In the 2007 Golden Gloves national championship he defeated cadet world champion Isiah Thomas and David Thompson to reach the finals. There he defeated Quantis Graves and won a 31-15 decision over James Zimmerman.

Also in 2007 he made an impressive showing at the Olympic Trials, besting Graves twice more before winning the competition in 21 bouts. He lost a 20-23 decision to Poland's Krzysztof Zimnoch in that year's world championships.

Wilder began 2008 by defeating Rakhim Chakhiyev in Russia. He qualified for the Olympics by defeating Deivis Julio of Columbia, Jorge Quinones of Ecuador and Rafael Lima of Brazil. During the Olympics he defeated Abdelaziz Toulbini of Algeria and Mohamed Arjaoui of Morocco to reach the semifinal bout in Worker's Indoor Arena in Beijing. There he lost to Clemente Russo of Italy and finished with a Bronze medal.

Wilder, called "The Bronze Bomber" for his Olympic success, is managed by Deas and Shelly Finkel for Golden Boy Promotions. His trainer, Mark Breland, moved to Northport from Brooklyn to work with the fighter. Wilder made his professional debut on the undercard of Jeff Lacy versus Jermain Taylor fight. He fought Ethan Cox and won by technical knock-out in the second round of a four-round bout.

Wilder claimed his first professional title in December 2012, by knocking out Kelvin Price in three rounds to win the WBC Continental Americas heavyweight title in Los Angeles, California. After a March 2014 victory over Malik Scott in Puerto Rico, Wilder entered discussion as a contender for a world heavyweight title.

Wilder's shot at the WBC title came against Haitian Bermane Stiverne on January 17, 2015. He won by unanimous decision after 12 rounds, fighting half the bout with a broken hand. His next fight, a title defense against #15 ranked Eric Molina, was held on June 13, 2015 at Bartow Arena. Wilder knocked Molina out in the 9th round to hold his title. He returned to Birmingham to fight 11th ranked French heavyweight Johann Duhaupas on September 26 at Legacy Arena. That bout went to the 11th round before Wilder was awarded the fight by technical knockout.

Wilder was scheduled to defend his title against top-ranked contender Alexander Povetkin in Moscow on May 21, 2016 for a $4.5 million purse. The bout was canceled when Povetkin tested positive for meldonium. As a metabolic modulator, meldonium was effectively restricted from men's competitions in 2001, but was not specifically banned by the World Anti-Doping Agency until January 1, 2016.

Unable to secure an opportunity to attempt unification of heavyweight championships, Wilder defended his WBC belt against Stiverne, Luis Ortiz, Tyson Fury and Dominic Breazeale. His December 1, 2018 bout with Fury ended in a draw, and in a rematch on February 22, 2020 Wilder's corner threw in the towel in the 7th round after two knockdowns. In post-fight interviews, Wilder blamed the 40-pound costume he wore out of the gate for sapping his leg strength.