The Legacy Arena at the BJCC, formerly called the BJCC Coliseum is a 22,400 square-foot oval-shaped arena anchoring the southwest corner of the Birmingham-Jefferson Convention Complex at 9th Avenue North and 19th Street, just north of I-20/59 in downtown Birmingham.

The venue seats about 17,000 for sporting events and up to 19,000 for concerts. The arena floor measures 110' x 220' with its ceiling 75' feet above. A four-sided center-hung scoreboard, designed by Daktronics, measures 18' by 18' on each side. Also on each side is a 7.5'-by-8'8" ProStar 16.5mm video display. Backstage there are 2 locker rooms and 6 dressing rooms as well as a press room and a VIP Reception area. The arena can accommodate 8 trucks backstage, with three at truck docks. The arena also contains several luxury suites and a press box.

In its first years the arena was home ice for the Birmingham Bulls of the World Hockey Association. It was also the home court for the Samford Bulldogs and UAB Blazers basketball teams before they moved to on-campus arenas. It later served as the home of the Birmingham Steeldogs arena football team. The coliseum also hosts major concert tours, Disney on Ice, the Ringling Brothers and Barnum and Bailey Circus, and other events, including trade shows, conventions and concerts.

The BJCC was the host of the 2009 Davis Cup first round tie‎ between the United States and Switzerland on March 6, 7, and 8, 2009. The three day attendance total of 45,708 made it the most attended first-round tie in U.S. Davis Cup history.

In the summer of 2009 the BJCC board spent $560,000 to install acoustic panels and screens in the arena to improve sound performance. Later that year the board approved $100,000 to upgrade the structural capacity of the ceiling in order to accommodate a performance by Miley Cyrus, but arena officials worked with the promoter to design an alternative rigging solution that did not require the modifications.

In December 2014 Red Mountain Entertainment brokered a 5-year, $2 million contract between the BJCC and Legacy Community Federal Credit Union for naming rights to the arena. 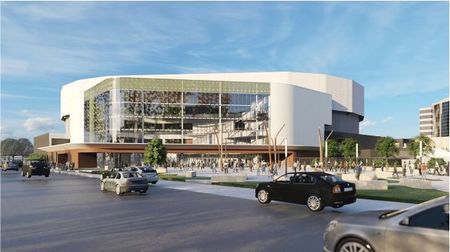 Rendering of the proposed renovations to Legacy Arena

The Birmingham Design Review Committee approved the exterior design and materials on December 11, 2019.