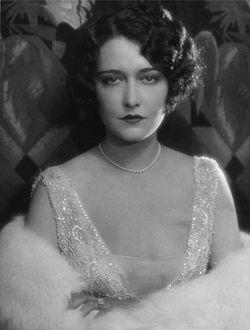 Dorothy Sebastian (born Dorothy Sabiston April 26, 1903 in Birmingham, died April 8, 1957 in Los Angeles, California) was a Ziegfeld Girl and silent film actress who starred with Joan Crawford and Anita Page in a series of MGM romantic dramas including Our Dancing Daughters (1928), Our Modern Maidens (1929) and Our Blushing Brides (1930).

Dorothy was born in Birmingham to Robert Lazarus and Stell Armstrong Sabiston, who had served together as foreign missionaries. She had three sisters and a brother. Dorothy and her mother ran a small shop where they sold portrait sketches and needlepoint. While still a teenager, she eloped with her high school sweetheart Al Stafford, but the union ended in divorce in 1924. Shortly after she went to Hollywood to pursue acting full time and landed roles in films the very next year.

In 1928 she became engaged to director Clarence Brown, who divorced earlier that year. They met when he showed up at her apartment to listen to the Dempsey-Sharkey fight on the radio. The engagement was broken off when she started seeing Buster Keaton during his unhappy marrage to Natalie Talmadge. She co-starred with Keaton in his 1929 film Spite Marriage.

On December 19, 1930 Sebastian flew to Las Vegas to marry Hopalong Cassidy star William Boyd, whom she had met while filming His First Command (1929) and Officer O'Brien (1930). During the six years of their marriage she did not work in films. After their divorce in 1936, Dorothy attempted a comeback, appearing in much smaller roles, the last in 1948. She died of cancer in 1957 in Los Angeles, California. She was survived by her third husband, Herman Shapiro.