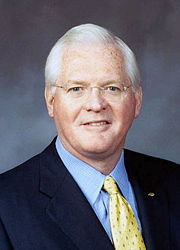 Claude Dowd Ritter Jr (born August 13, 1947 in Birmingham) was CEO of Regions Bank from 1996 to his retirement in 2010 and chair of the Birmingham Business Alliance.

Ritter was the son of attorney Claude Ritter and the former Bessie Gunter of Crestline Heights. He graduated from Shades Valley High School in 1965 and earned his bachelor of arts in economics at Birmingham-Southern College in 1969. Within weeks after graduating, he married his wife Susan and began working for the First National Bank of Birmingham. He was soon placed in the bank's management training program and later completed a course of study at the School of Banking of the South at Louisiana State University.

Ritter worked his way up through the company, becoming manager of the Center Point branch in 1971, supervisor of a group of local branches in 1975, and head of branch administration in 1978. He was made an executive vice-president for retail banking in 1980 and a senior executive vice president for the trust division in 1988. From there he was elected to the board of directors in 1993.

In 1994, during lunch at the Smokehouse Restaurant in North Birmingham, president and CEO John Woods tapped Ritter as his successor. Over the next two years he oversaw a restructuring of the bank which involved numerous branch closures and layoffs. He took over the bank as president on January 1, 1996 and became chairman of the board in August of the same year.

Ritter oversaw the merger of AmSouth with Regions Bank and became CEO of the combined company in 2006. The bank maintained its status as Birmingham's largest private employer and lone remaining Fortune 500 company, but share prices took a beating as the bank struggled to overcome defaulting loans and other trials during the Great Recession. Ritter and other executives were criticized for their compensation and use of company planes for vacations during the crisis. He retired on March 31, 2010 and was succeeded by Grayson Hall.

In addition to his corporate leadership, Ritter is active in civic affairs, having chaired a fundraising drive for United Way of Central Alabama and coordinating the Birmingham Festival of Arts' 1990 Salute to Australia. He chaired the 50th anniversary campaign for the Community Foundation of Greater Birmingham and, with his wife, co-chaired the capital campaign that led to the new Ronald McDonald House in 2006. He is also chairman of the board of trustees for Birmingham-Southern College and a member of the UAB President's Advisory Council.