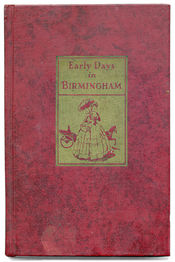 Early Days in Birmingham (published September, 1968) is a collection of 24 papers presented by members of the Pioneers Club, made up of women who had lived in Birmingham before the December 31, 1873 "Calico Ball".

Beginning in 1914 the club met twice annually and presented papers on assigned historical topics. As eyewitnesses -- and often participants -- in the events described, the women's papers comprise a singular resource for historians.

In anticipation of Birmingham's 1971 Centennial the papers were published in 1968 by the Southern University Press. A brief biographical sketch of the author was added as an epigram to each chapter. The Birmingham Publishing Company printed and bound the 102-page book in a hardback edition of 500 copies.