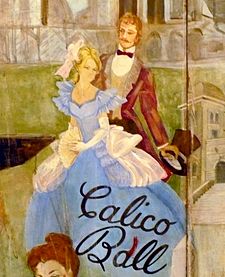 The Calico Ball was a landmark celebration hosted by Charles Linn at his newly-completed National Bank of Birmingham building on New Year's Eve in 1873. The gala event marked the culmination of a woeful year in Birmingham's infancy and set an optimistic tone for the coming year, during which the fortunes of the city improved greatly.

Among the calamities of 1873 were a cholera epidemic that felled or drove away most of the city's residents, and a national financial panic that disrupted industrial investment and rendered local real estate all but worthless.

Linn, one of the city's major stakeholders and business investors, was president of the National Bank of Birmingham and, despite the venture's obvious peril, pushed his three-story brick bank building to completion. The project, the tallest and grandest building yet built in the city, was labelled "Linn's Folly" by skeptics who advised him to cut his losses. 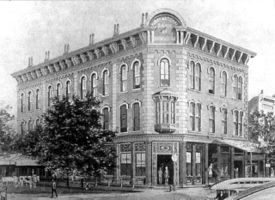 "Linn's Folly", the newly-built venue for the ball

Unswayed, Linn saw the building completed in December and invited 500 guests to an opening-night celebration. As evening fell, he and his family took their places at the front door to welcome guests. At Linn's urging, and in acknowledgement of the city's financial woes, many of the ladies and gentlemen in attendance had their ball gowns and evening suits fabricated from calico. Linn modeled a brown and tan dress suit with oversize buttons. Some, such as Sallie Harrison, winner of the contest for "prettiest dress" wore "imported" finery from Montgomery.

Linn's daughter, Lizzie provided piano music on the first floor where a spread of sandwiches and coffee provided refreshment. At 9:00 PM the James T. DeJarnette band from Montgomery began playing music for reels, lancers, cotillions, rounds, and other dances in the 2nd floor ballroom. The stroke of midnight was marked by a stoppage in the music and the presentation of painted panels depicting the passing figures of 1873 and the coming glories of 1874. The dancing resumed and continued to 2:30 AM.

The Ball has lived on in the city's historical lore. Having one's family name among the roster of attendees long signaled membership among the city's oldest and most loyal families. The gala was portrayed in the "Pageant of Birmingham" during the Semicentenniel of Birmingham in 1921. The Calico Ball is also the title of a historical novel by Emma Gelders Sterne published in 1934. The novel culminates with a vivid description of the event. The Calico Ball is also depicted on Eleanor Bridges' monumental Cyclorama of Birmingham History, which was designed for the lobby of the Brown-Marx Building, built on the original site of "Linn's Folly".