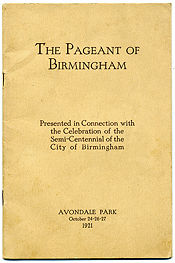 Cover of the pageant program

The Pageant of Birmingham was a gala production performed in celebration of the Semicentennial of Birmingham, on October 24, 26 & 27, 1921 at the newly-built Avondale Park amphitheater.

The pageant, written by Wallace Rice and directed by Donald Robertson, dramatized the first arrival of white explorers in Alabama in the 1540s; the election to move the Jefferson County Courthouse from Elyton to Birmingham; the Calico Ball celebrating the end of the 1873 cholera epidemic; the smelting of iron ore; and local participation in the Great War, concluding with a scene of peace and prosperity.

In the final tableau, the figure of Birmingham (played by Mrs William Hood Jr) greets the figures of Alabama (Mrs Alex Montgomery) and America (Mrs Ed Warner), each seated on a throne with attendants and flanked by torchbearers representing Union and Liberty. The final song is the Star-Spangled Banner, sung with the following lyrics:

On thy shores, happy throng all the Nations of earth
As thy children stand forth to take part in thy story.
As thine own they have come her in festival mirth
To obey thy commands and to share in thy glory.
'Tis the Many in One thy standard have run—
One at heart, one in peace, under Liberty's sun.
So the star-spangled banner in triumph shall wave
O'er the land of the free and the home of the brave

President Warren Harding was in attendance for the second performance of the pageant, before departing for Camp Benning, Georgia on a midnight train.