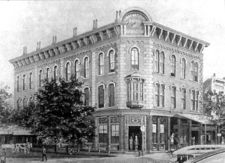 Months before the bank was actually organized, James Powell, president of the Elyton Land Company, circulated drawings of a banking building with Charles Linn noted as its president. Linn, a successful Montgomery businessman, had been courted by Powell to open a bank in the new city, but it wasn't until after receiving messages of congratulations on the venture that he actually agreed to do it.

The bank's first office, a $4,000 wooden structure built on a $400 lot on the northeast corner of 1st Avenue North and 20th Street opened to the public on January 2, 1873. Linn held $450 of the initial distribution of $500 in stock. Other shareholders in the bank included Powell, Bryant Tully, Mortimer H. Jordan, Willis J. Milner, James O'Connor and B. P. Worthington.

Later that year, a $36,000 3-story brick building, known as the Linn Bank Building or "Linn's Folly" was constructed on the same plot. The spectacle of such a major structure being built in the midst of a national economic depression, when the prospects for the new city of Birmingham were anything but sure, earned it its nickname. A magnificent "Calico Ball" held in the building that New Year's Eve, marked a turning point in the fortunes of the city.