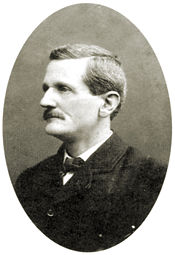 William Harrington Morris (born August 17, 1847 in Troup County, Georgia; died June 20, 1910 in Birmingham) was a noted businessman, the third Mayor of Birmingham and founder of the Avondale Land Company.

Morris was one of nine children born to Lewis D. and Martha Roe Moore Morris of Georgia. As a young man he moved to Alabama, spending time in Chambers and Calhoun Counties. During the Civil War he served in the Confederate army under General Nathan Forrest for three and a half years, notably in the Battle of Franklin in Tennessee. On his way home at the war's end he stopped at the Jacksonville plantation of Nolan and Sarah Yancey Wright. There he met and married the Wright's daughter, Arabella.

In 1870 Morris came to Jefferson County from Jacksonville, settling in the area now known as Avondale. After the founding of Birmingham, he bought a lot in town, at 19th Street North and 4th Alley, which he later combined with an adjacent lot and erected a house called Magnolia Place.

Morris was president of the American National Bank and an officer of the Birmingham Street Railway Company. He also served on the Birmingham Board of Aldermen under James Powell's administration. In the 1874 Birmingham municipal election, the 28-year-old Morris defeated W. T. Parker and others for the post. He took office on January 4, 1875 and was responsible for crafting the city's first code of laws.

Morris was reelected to a second term, defeating James O'Connor in the 1876 election, but resigned before his term was completed in 1878 to focus on his business interests. Henry M. Caldwell, president of the Elyton Land Company, was appointed by the Board of Aldermen to serve the remainder of his term.

Morris was the founder of the Avondale Land Company which developed the city of Avondale. He also helped organize the Birmingham Gas Company, the Birmingham Steam Laundry, and the Enterprise Manufacturing Company. Form 1888 to 1889 he served as Postmaster of Birmingham.

Morris married the former Arabella Wright and had three sons: Robert A., John Lewis, William H. Morris Jr (who died in infancy), and Arabella Roe. Morris died in 1910 and is buried at Oak Hill Cemetery.