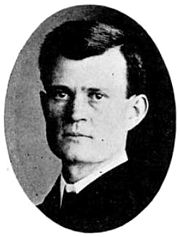 Morris was the oldest son of William H. Morris, third Mayor of Birmingham, and his wife Arabella. Robert moved with his parents to the new city of Birmingham in 1871. He attended local schools and one year at Howard College, with classes in bookkeeping. He entered the U. S. Postal Service as a clerk in the Birmingham Post Office and, after a few years, was promoted to superintendent of mails.

From 1880 to 1894 Morris was active in the Alabama National Guard, rising from private to lieutenant, notably taking part in the action to suppress the riot at the capture of Richard Hawes, who had murdered his wife and daughters. He married the former Lillian Walker on November 12, 1890, with whom he had one daughter, Willie.

In 1895 Morris became chief clerk in the department of estates in the Jefferson County Probate Court, appointed by Judge M. T. Porter. He held that position until he was elected County Auditor in 1902. He was also elected to the East Lake Board of Aldermen, serving as chair of the judiciary and lake committees.