The Hawes murders were a notorious and sensational crime discovered in December 1888 that produced a deadly riot and gained nationwide media attention for the young city of Birmingham. The murders of Emma Hawes along with her two daughters, May, age 7 or 8, and Irene, 6, are attributed to Georgia-Pacific engineer Richard Hawes, who lived on 32nd Street South. 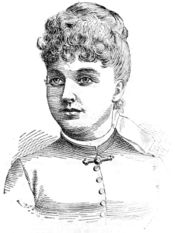 According to a coroner's inquest, it appeared that Richard Hawes and his wife Emma had a troubled marriage. Richard married 18 year old Emma in Atlanta, Georgia and marital difficulties lead the couple to leave Atlanta for Montgomery, and then Birmingham. Working for Georgia-Pacific, Hawes often left his family alone in their cottage while running trains between Birmingham and Columbus, Mississippi. Emma was accounted as an alcoholic. Eldest daughter May was forced to care for her younger sister, Irene, and her little brother Willie Hawes, who was 4 or 5 at the time of the murders, with some household help from Fannie Bryant, a mulatto woman who did laundry and cooked for the family.

The body of a young white female was found in East Lake on Tuesday, December 4, 1888 by local teenaged boaters John Keith and Ben Culbalson. Jefferson County Coroner Alfred Babbitt conducted an initial exam on site and determined the cause of death to be murder. The body was then laid out for view to the general public at Lockwood & Miller's Funeral Parlor in hopes that someone would identify the girl. Teachers at local schools dismissed their students early so that they could participate in viewing and identification. Despite being viewed by thousands it wasn't until the next day that a local butcher was able to identify the deceased as May Hawes, daughter of Richard and Emma Hawes.

During the following inquest, conflicting reports arose. While many witnesses believed that Emma was Richard's wife, several witnesses swore that Richard Hawes was divorced and had left for Columbus, Mississippi to marry again. Fannie Bryant, the woman of mixed race that worked in the Hawes household, stated that on the weekend before May's body was found, she saw Richard and May help Emma pack for a trip to Atlanta to retrieve youngest son Willie, who was staying with Richard's family at the time.

After the inquest adjourned, a telegram was delivered to the Weekly Age-Herald office announcing Hawes' marriage to the former Mayes Story in Mississippi that very afternoon. It also listed their train itinerary from Columbus, Mississippi to Atlanta, Georgia. When the train made a stop at the Birmingham station, police officers boarded and arrested Hawes for murder. According to the Age-Herald reporter on the scene, Hawes "asked no questions as to which of his children he was accused of having murdered, nor did he express any desire to see the remains. About all that he said on the way to the jail was that he was innocent."

In custody, Hawes pleaded his innocence and wrote beseeching letters to his new bride asking forgiveness for claiming to be a widower and not mentioning having a daughter. To police, he claimed to have completed his divorce to Emma, citing her frequent infidelity, and arranged for the care of his daughters, though no record was ever found. Hawes told an Age-Herald reporter that he had last seen May three days before her body was discovered.

Rumors that Emma was known to have a sum of cash lent credence to the idea that Fannie or her companion, Albert Patterson, were behind the deaths, though no hard evidence came to light in the later trial.

While Hawes' youngest child, Willie, continued to remain safely in Atlanta with Richard's brother Jim Hawes, Birmingham police began a full scale search for Emma and Irene. During one of many searches, police found a freshly dug grave within a nearby suburb that contained the body of a black female child. Eclipsed by the high-profile Hawes murder, apparently little effort was made to find out what happened to the young black girl. 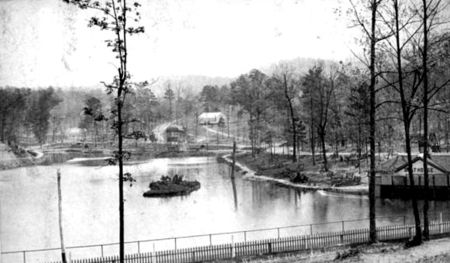 The discovery of a bloody hatchet and a torn ribbon, led investigators to Lakeview Park,now the Highland Park Golf Course, where, on Saturday, December 8, they dragged the lake, revealing Emma Hawes' bruised and beaten body, weighted down with iron.

Beneficiaries of a growing national scandal, the Age-Herald vied with the Atlanta Constitution and other papers to uncover the most lurid details and offer the most notable speculations on the case.

After a riot ensued that was created by the horror of these murders, a renewed effort was made to find Irene Hawes. Though repeated dragging of the lake offered up no body, the lake was then drained. On the third day of draining, Irene's body was found approximately thirty feet from where her mother's was, also weighted down. Irene's body was taken to the Lakeview Park Pavilion for a cursory examination. Hoping to avoid another riot, Irene's body was taken from the pavilion directly to the city cemetery, where she was immediately interred. 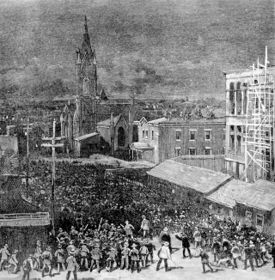 As the news spread through the city late on the evening of Saturday, December 8, a mob about 2,000 people converged at the Jefferson County Jail to see Hawes hanged. Sheriff Joseph S. Smith issued shotguns and rifles to prison guards and placed them on the roof of the jail. After shouting several warnings at the advancing mob, he ordered a volley of shots into the crowd, which resulted in 10 deaths, but did succeed in dispersing the crowd. 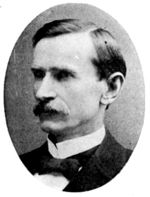 The Hawes trial began on Monday, April 22, 1889 at Jefferson County Courthouse, presided over by Judge Samuel Greene. Although Hawes was charged with murdering all three victims, the state decided the strongest case around Richard lay with the facts around May's murder, and structured the trial around it.

Since there were no witnesses to the actual crime, the prosecution's case was built upon circumstantial evidence.

According to Fannie Bryant, May had been staying with her at a boarding house on the night of December 3, 1888. Eye-witness testimony places Richard and May Hawes getting onto a rail on December 3 around 7 to 8 pm, getting off at the East Lake stop together, and Richard, or a man who looked liked him, getting back on the rail for the return trip less than an hour later, alone. Hawes then left town the next morning for Mississippi.

Hawes' motive in murdering May, according to prosecutors, was to hush up all knowledge of his previous murder of her mother and younger sister. The prosecution maintained that Hawes' motive was one of lust - he needed to dispose of his wife and children in order to marry Miss Story. 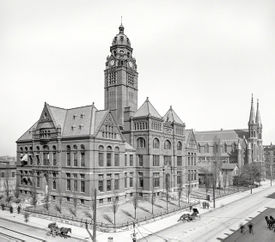 Hawes' defense was based mostly on Richard's own testimony, since no one could be found to back up his alibi.

Richard's defense stated that the eye-witness account presented by the prosecution was faulty due to memory lapses or deceit. Hawes claimed to have, indeed, gone to East Lake with May, but on the night of Saturday, December 1, not the 3rd, on a shopping trip. He claimed to have arrived back home, May in tow, the same evening around 8:30 pm. He then left home for the city again on the same night to send his son, Willie, off on a train to Atlanta.

After spending several more hours in town, he arrived home early in the morning on Sunday, December 2, and found the door to his house open and his wife and daughters gone. He claimed that he thought his wife had taken his daughters to visit friends. He then left town for Columbus, Mississippi the following Tuesday, after taking care of some minor business arrangements. 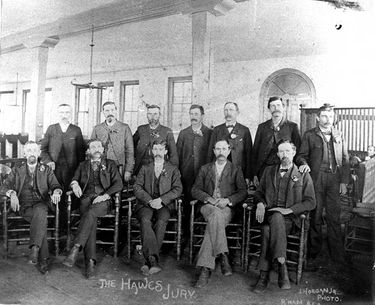 Judge Greene defined the four possible verdicts that were available to the jury before they began their deliberations: 1. First degree manslaughter would have Hawes imprisoned for no less or no more than ten years, 2. Second degree murder would confine Hawes to jail for no less than ten years, but possibly for longer, 3. First degree murder would sentence Hawes to life imprisonment or the death penalty, and 4. Not guilty.

The jury, composed entirely of middle to upper class white males aged 28 to 47 deliberated for fifty-five minutes and decided upon the death penalty on May 3, 1889. The defense submitted several appeals to the Alabama Supreme Court, but all were denied. During this time, a request from a St. Louis circus owner to display the caged murderer in his sideshow was rejected.

During Hawes' last month in jail, he apparently admitted to his brother Jim and a guard that he had paid an associate, John Wylie, to commit the murders. He told the guard that he initially wanted Wylie to kill only Emma and Irene, but when it appeared that May might know some information about the murder, Hawes decided to intoxicate May and drown her at East Lake Park. When the guard made this confession public, Hawes denied it. No other evidence emerged.

Hawes' last meal in jail consisted of steak, poached eggs, and coffee, compliments of the Palace Royal Hotel, of which he ate little. Merchant L. Schloss & Co. donated a black cutaway suit, white shirt, necktie, standing collar and patent-leather slippers for the condemned man to wear to his grave. His lapel was decorated with a geranium.

Hawes was executed by Sheriff Smith on February 28, 1890. The gallows platform was constructed for the occasion by J. A. Griffith, who had also served on Hawes' jury. Tickets to the spectacle were trading on the street for as much as $200. After a prayer, Smith counted to three and pulled the lever, dropping the platform. Hawes was buried by his brother, Jim, in an unmarked grave in the family's plot at Oakland Cemetery in Atlanta. No words were spoken over the grave.

Fannie Bryant and Albert Patterson were also sentenced to death for their role in aiding Hawes. Bryant died in a prison riot before the sentence was carried out, and Patterson won a reduced sentence for testifying for the state. John Wylie was later brought to trail for the murders of Irene and Emma, but due to lack of evidence the case was dismissed.

Emma, Irene, and May Hawes are buried next to each other in unmarked graves at Oak Hill Cemetery. It is unknown as to what became of Willie Hawes, though it is generally thought that Richard's brother Jim continued to care for him in Atlanta.