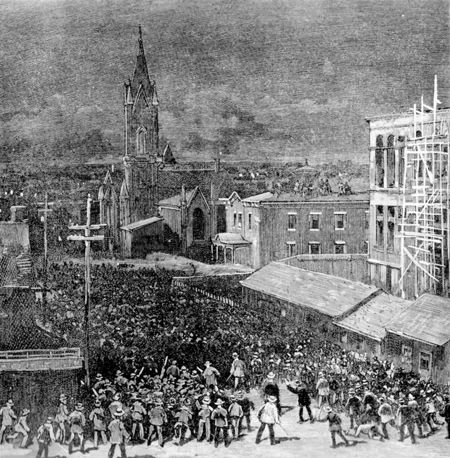 The Hawes riot was a major event in early Birmingham which occurred on the evening of December 8, 1888 when a mob estimated at two-thousand people converged at the Jefferson County jail on 21st Street North, many hoping to take accused murderer Richard Hawes out of the Sheriff's custody and lynch him.

The size and character of the mob was influenced by the fact that news of Hawes' arrest rippled through the city's taverns late on Saturday evening, just hours after his wife's body had been dredged up from Lakeview Park.

Police chief A. O. Pickard and Sheriff Joseph S. Smith warned the advancing mob to halt several times. Ultimately Smith ordered a volley of shots into the mob from the prison guards stationed on the roof with rifles and shotguns. The fusillade, sometimes mistakenly attributed to a Gatling gun, killed ten men and injured 30 others, but did succeed in dispersing the mob. Among the dead were postmaster Maurice Throckmorton, a deputy U. S. Marshal, a civil engineer and a painter.

The next day, Alabama National Guard officer Thomas Jones was given command of thirteen militia company by Governor Thomas Seay and charged with restoring order. In addition to the Jefferson County Volunteers, Birmingham Rifles and Birmingham Artillery, these included the Montgomery True Blues, Montgomery Mounted Rifles, Montgomery Grays, Montgomery Field Artillery, Warrior Guards, Anniston Rifles, Butler Rifles, Greenville Light Guards, and Lee Light Infantry. The companies bivouacked on the grounds of the courthouse, then under construction, while Jones set up a field office in the contractor's office.

Governor Seay also traveled to Birmingham to hear the city's plans to repair its reputation for lawlessness. Jones had Chief Pickard, Sheriff Smith and three other officials arrested for murder. One of them was freed immediately when it was shown he was not present. The others were released on bail and soon acquitted by juries who found that their intent had not been murder. Both Pickard and Smith served the remainder of their terms.