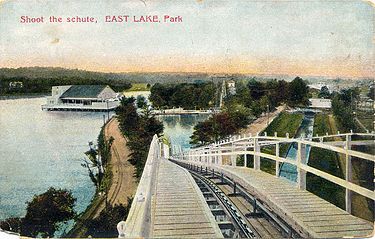 The City of Birmingham purchased the property for $65,000 on July 14, 1917 and dedicated it as a public park on May 10, 1918. The city kept many of its attractions open over the next decades while adding other recreational facilities. Some of the new features included a caterpillar ride, seaplane, "The Whip", the "Rolling Mill" and the "Old Mill" along with a riding academy, pleasure boats, playground, barbecue stand and other food and drink vendors.

For 1923 $40,000 in new attractions was invested, providing for a "Dodgem" ride, and what was then the longest roller coaster in the South was constructed at the park; 1/4-mile long with 14 dips, including one of 54 feet. On November 20 of that year, Wahouma's Nathan Bedford Forrest Klan No. 60 inducted 2,100 new members at a torchlit ceremony in the park. The city invested another $75,000 on improvements during the winter of 1923-1924, highlighted by a $25,000 merry-go-round completed with a calliope and 1,380 electric lights. The bathing beach was expanded and rebuilt with new diving wells dug into the lake bottom. Also added were a miniature railroad and other rides.

The city displays the flags of the home countries of its sister cities on the 1st Avenue edge of the park. In 2012 East Lake Park was listed on the Appalachian Highlands Birding Trail. In 2022 the city replaced the park's tennis courts with a $250,000 "outdoor gym" with accessible workout equipment.