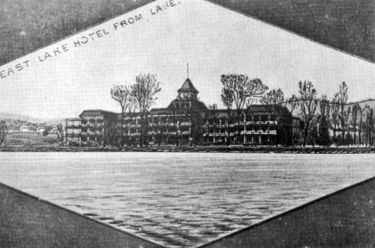 Drawing of the East Lake Hotel

The East Lake Hotel was a 150-room resort hotel constructed at the eastern end of East Lake (originally "Lake Como") in 1889. It was developed by C. M. Boulden on land leased from the East Lake Land Company at the terminus of the East Lake Railroad, at 1st Avenue North and 83rd Street.

The two-story building, which cost $20,000, was constructed of heart pine with a porch wrapping three sides. A spacious lobby and dining room occupied the center of the 200-foot long building. Boulden, who resided in the hotel as its owner and operator, hoped that the guest rooms would fill up with overnight visitors from Birmingham, eager to escape the bustle and smoke of the industrial boom-town. Those hopes went unfulfilled, however, and it suffered in competition with the Lakeview Hotel closer to the city. The East Lake Hotel's most successful event was the 3rd annual ball held by the Jefferson Volunteers on May 15, 1890.

Boulden began to imagine that the resort might be better suited to institutional use and sought to market the property as a potential Confederate veterans home, or as an alternative site for the soon-to-open East Lake Atheneum. Meanwhile he closed the hotel after only a year in operation and sold off all of the furnishings, except for those in his own apartment.

At daybreak on June 10, 1891 the hotel building was engulfed in fire. Its heart pine fueled an inferno that scorched trees 500 yards away. The structure was entirely consumed in about 45 minutes, but no one was injured. Boulden had left the previous evening to attend to business in Panama City, Florida. The cause of the fire was never determined and Boulden collected a $15,000 insurance claim.